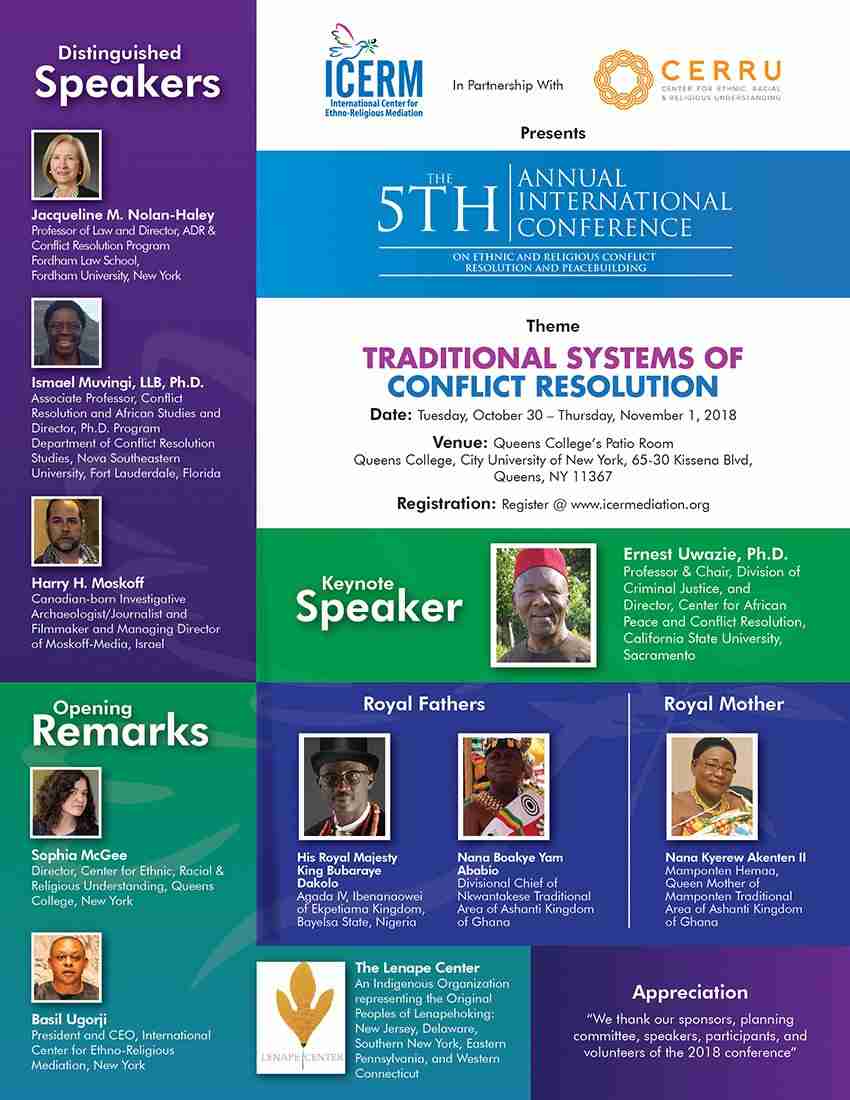 The International Center for Ethno-Religious Mediation believes that an international conference on the Traditional Systems of Conflict Resolution is highly needed at this crucial time in world history. The traditional rulers are the custodians of peace at the grassroots level, and for a long time, the international community has ignored them and their wealth of knowledge and wisdom in the areas of conflict resolution and peacebuilding. It is high time we included the traditional rulers and indigenous leaders in the discussion on international peace and security. It is high time we gave them the opportunity to contribute to our overall knowledge of conflict resolution, peacemaking and peacebuilding.

Presentations at this international conference on the traditional systems of conflict resolution will be given by two groups of people. The first group of presenters are the delegates representing the councils of traditional rulers or indigenous leaders from various countries around the world who are invited to share best practices and speak on the roles the traditional rulers play in the peaceful resolution of conflict, promotion of social cohesion, peaceful coexistence and harmony, restorative justice, national security, and sustainable peace and development in their various countries. The second group of presenters are experts, researchers, scholars and policy makers whose accepted abstracts cover a wide range of qualitative, quantitative, or mixed methods research studies on the traditional systems of conflict resolution, including, but not limited to, theoretical frameworks, models, cases, practices, historical analyses, comparative studies, sociological studies, policy and legal studies (both national and international), economic studies, cultural and ethnic studies, systems design, and processes of traditional systems of conflict resolution.

Anticipated Outcomes and Benchmarks for Success

We will measure attitude changes and increased knowledge via pre and post session tests and conference evaluations. We will measure process objectives through collection of data re: nos. participating; groups represented – number and type -, completion of post-conference activities and by achieving the benchmarks below leading to success.

Every year, the International Center for Ethno-Religious Mediation convenes and hosts the Annual International Conference on Ethnic and Religious Conflict Resolution and Peacebuilding in New York City. In 2018, the conference was held at Queens College, City University of New York, in partnership with the Center for Ethnic, Racial & Religious Understanding (CERRU), from October 30 to November 1. The theme of the conference was Traditional Systems of Conflict Resolution. The conference was attended by delegates representing the councils of traditional rulers / indigenous leaders and experts, researchers, scholars, students, practitioners, and policy makers from many countries around the world. The photos in these albums were taken on the first, second and third days of the conference. Participants who want to download copies of their photos can do so on this page or visit our Facebook albums for the 2018 conference.

Abstract The goal of this paper is to explore and explain the organizational culture – the foundational assumptions, shared values and system of beliefs –…