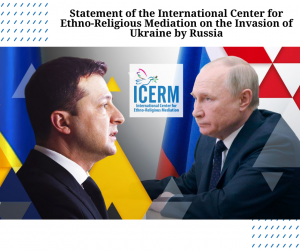 The International Center for Ethno-Religious Mediation (ICERM) condemns the invasion of Ukraine by Russia as a flagrant violation of Article 2(4) of the UN Charter which obliges member states to refrain in their international relations from the threat or use of force against the territorial integrity or political independence of any state.

By initiating military action against Ukraine which has resulted in a humanitarian catastrophe, President Vladimir Putin has put the lives of Ukrainians in danger. Russia’s war in Ukraine that began on February 24, 2022 has already resulted in thousands of military and civilian deaths, and damage to vital infrastructure. It has caused mass exodus of Ukrainian citizens and immigrants to the neighboring countries of Poland, Romania, Slovakia, Hungary, and Moldova.

ICERM is aware of the political differences, disagreements and historical disputes that exist between Russia, Ukraine and, ultimately NATO. However, the cost of armed conflict has always involved human suffering and unnecessary death, and that cost is far too high to pay when diplomatic channels remain open to all parties. ICERM’s primary interest is the achievement of a peaceful resolution of the conflict through mediation and dialogue. Our concern is not only the direct effects of the conflict, but also those of internationally imposed sanctions on Russia that ultimately affect the average citizen and the inevitable widespread economic impact particularly on vulnerable regions of the world. These disproportionately put already at-risk groups in further peril.

ICERM also notes with serious concern the reports of racially motivated discrimination targeting African, South Asian, and Caribbean refugees fleeing from Ukraine, and strongly urges the authorities to respect the rights of these minorities to cross international borders to safety, regardless of race, color, language, religion, or nationality.

ICERM strongly condemns the Russian invasion of Ukraine, calls for an observation of the ceasefire agreed upon to allow the safe evacuation of civilians, and appeals for peace negotiations to avoid more humanitarian and material damage. Our organization supports all efforts that promote the use of dialogue, nonviolence, and other alternative dispute resolution systems and processes and, therefore, encourages the parties in this conflict to meet at a mediation or negotiation table to resolve the issues and settle all disputes without the use of aggression.

Regardless, our organization acknowledges that the Russian military invasion does not represent the collective morals of the ordinary people of Russia who aim for peaceful and free coexistence with both their neighbors and within their territory and who do not tolerate the atrocities committed against Ukrainian civilians by the Russian military. Consequently, we demand engagement from all states as well as international, regional, and national organizations to spotlight and promote the value of human life and integrity, the protection of state sovereignty and, most importantly, worldwide peace.

ICERM Lecture on Russia’s War in Ukraine: Refugee Resettlement, Humanitarian Assistance, NATO’s Role, and Options for Settlement. The causes and nature of the discrimination Black and Asian refugees experienced when fleeing Ukraine to neighboring countries were also discussed.

Osamah Khalil, Ph.D. Dr. Osamah Khalil is an Associate Professor of History and the Chair of the Undergraduate International Relations Program at Syracuse University’s Maxwell School of Citizenship and Public Affairs.

Abstract The agitation of the Black Lives Matter movement has dominated the public discourse in the United States. Mobilized against the killing of unarmed black people, the…

Abstract The resurgence of radicalization within the Islamic religion in the 21st Century has manifested aptly in the Middle East and sub-Saharan Africa, especially beginning from…

You have already reported this
Clear Clear All